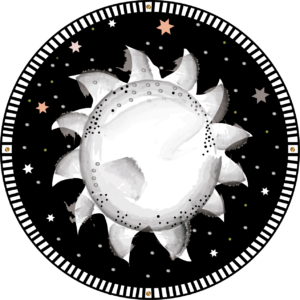 To state it simply, Cazimi means good luck and opportunity (AKA: Auspicious). However, in order to understand the actual meaning of a Cazimi in Astrology, we need to begin by looking at the power of the Sun. Its rays are so strong and influential that anything coming close to it is burned up by its immense power. This effect of the Sun’s power comes into account in the astrological interpretation of Cazimi.

In order to describe situations when the Sun and planets come into close encounters we use the terms “Combust”, “Under the Sunbeams” and “Cazimi.”

Any planet coming within 8 degrees of the Sun will never be seen and is called Combust. It makes the influence of the planet in question weak because the ray’s of the Sun are overshadowing any other influence.

Under the Sunbeams (Weak):

Any planet coming within 17 degrees of the Sun is referred to as Under the Sunbeams. This placement will make the influence of the planet in question weaker than usual because the ray’s of the Sun are still strong within this orb.

Any planet whose center is within 17 minutes of the arc of the center of the Sun is referred to as Cazimi. A Cazimi Moon (which can only happen at the time of a New Moon) is good to use if you want something to really succeed. It’s one of the highest forms of good luck. As far as the time frame goes, a Cazimi Moon is in effect for about a half an hour before the conjunction of the Sun and half an hour after. *Keep in mind that not all New Moons are Cazimi.