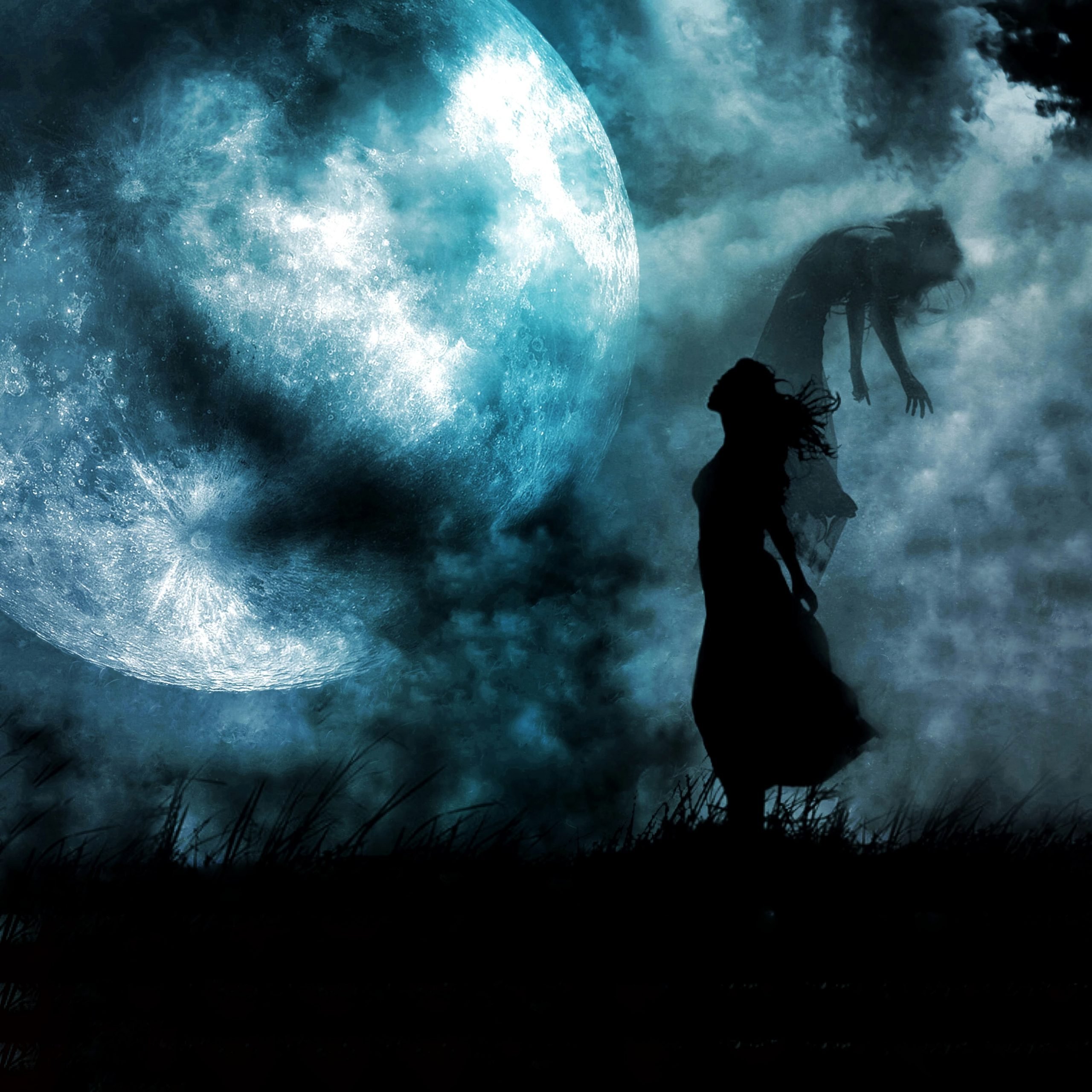 This Halloween promises to be extra spooky with a rare Blue Moon lighting the way. Blue Moons, which are the second full moon in a month, happen every 2 1/2 years or so. However, a Halloween Blue Moon hasn’t happened across all time zones since 1944. Whatever comes out of it, I have no doubt that this Halloween will be extra memorable … not just because of the Blue Moon but because of the astrology behind it!

✨ Blue Moons come around every 2 1/2-3 years … the last one was on March 31 2018
✨ Blue Moon is a term used to describe a second full moon in a month (the first one was on October 1)
✨The last Halloween Blue Full Moon was in 1944 making this particular Blue Moon quite a rare event
✨The Moon will likely not be blue unless there is some sort of rare condition in the atmosphere causing the moon to have a blue tint.Given that 2020 has proven to be a wild and rare year, the possibility is there for it to happen. We’ll just have to wait and see!💙

From an astrological perspective, the month of October will close out not only on the spooky side but more on a wild one!

With the Moon ripe in Taurus (the sign that takes no bull) dancing close to Uranus (the planet of unpredictability) it’s fair to say that some surprises of the unusual kind will be in store this Halloween. It’s time to take our awareness into a whole new level. If you’ve been stuck and looking for something more—than this full moon booster is going to be just the ticket into a whole new realm.

The only caveat is that it gets a little wild and freaky before the light starts shining in. Let’s not forget we’re dealing with both a Mercury and Mars retrograde alongside this Blue Moon story.

If you’ve been feeling bound by chains, or unhealthy attachments of any kind, this Halloween Blue Full Moon will create a release from whatever is holding you back.

Our connections with others might be brought to a tipping point and someone may come to a place where they just have to break free. It doesn’t come all that easily though. You know the saying that goes, “Things can get a little crazy during a full moon”?  Well, that saying will certainly ring true here—-especially since this is a full moon highlighting two very powerful signs (Taurus & Scorpio).

Let’s honor Scorpio’s desire to dive deep and look a little closer at the astrology behind this moon’s message ….

The full moon herself will be nestled safely in the sign of Taurus.

She likes the security and safety of this sign. The moon likes it here. It’s like being wrapped up in a big cozy blanket feeling safe and happy. We hold onto the blanket too because nobody likes to let go of that feeling of security and warmth.

Uranus, the planet that likes to create chaos and change, is operating in a full on collision with that safety and security of the moon.

It’s like something’s coming in and giving us a jolt into stepping outside of our comfort zone. Someone’s pulling our blanket away!

On the opposite side of the playing field will be the Sun now swimming strong in the sign that can drum up fear and is always looking for more. Scorpio will be working her magic and staring down the comforts and security of Taurus. These two are opposites after all.

Just like every other full moon, a balancing act will need to come into play. But this time around things will get a little more intense. Some of us are going to find ourselves on the scales teetering between the need for security (Taurus) and the desire or fear (Scorpio) for something more. Someone might push the envelope too far as a result.

The balancing point doesn’t come all that easily in this situation. That’s because both of these signs are “fixed” in their ways. Neither wants to budge and compromise tends to be difficult. In the end someone has to give in but that’s never before making their message is known.

When Scorpio comes into play, things (especially secrets) get revealed.

Anything that we’ve been neglecting to see and issues that we’re in denial over can suddenly come to the surface. A veil has the potential to lift and the mask we’ve been wearing suddenly comes off.

Part of the Scorpio message is to be fearless and make the effort to shine a light into the darkest of places. Maybe they only exist in the secret rooms of our psyche or in some theme in our life but they are usually there somewhere. The more we have – the bigger the potential for a big reveal or burst of awareness. If new information is revealed, then it will be important to take the time necessary to process it.

Whatever happens, the fact will remain that it’ll be something that only comes around once in a blue moon ….

Learn more about the astrology behind this Halloween Blue Full Moon including learning visuals, video and your sign’s details in Member Horoscopes.

Discover all that's Behind the Scenes 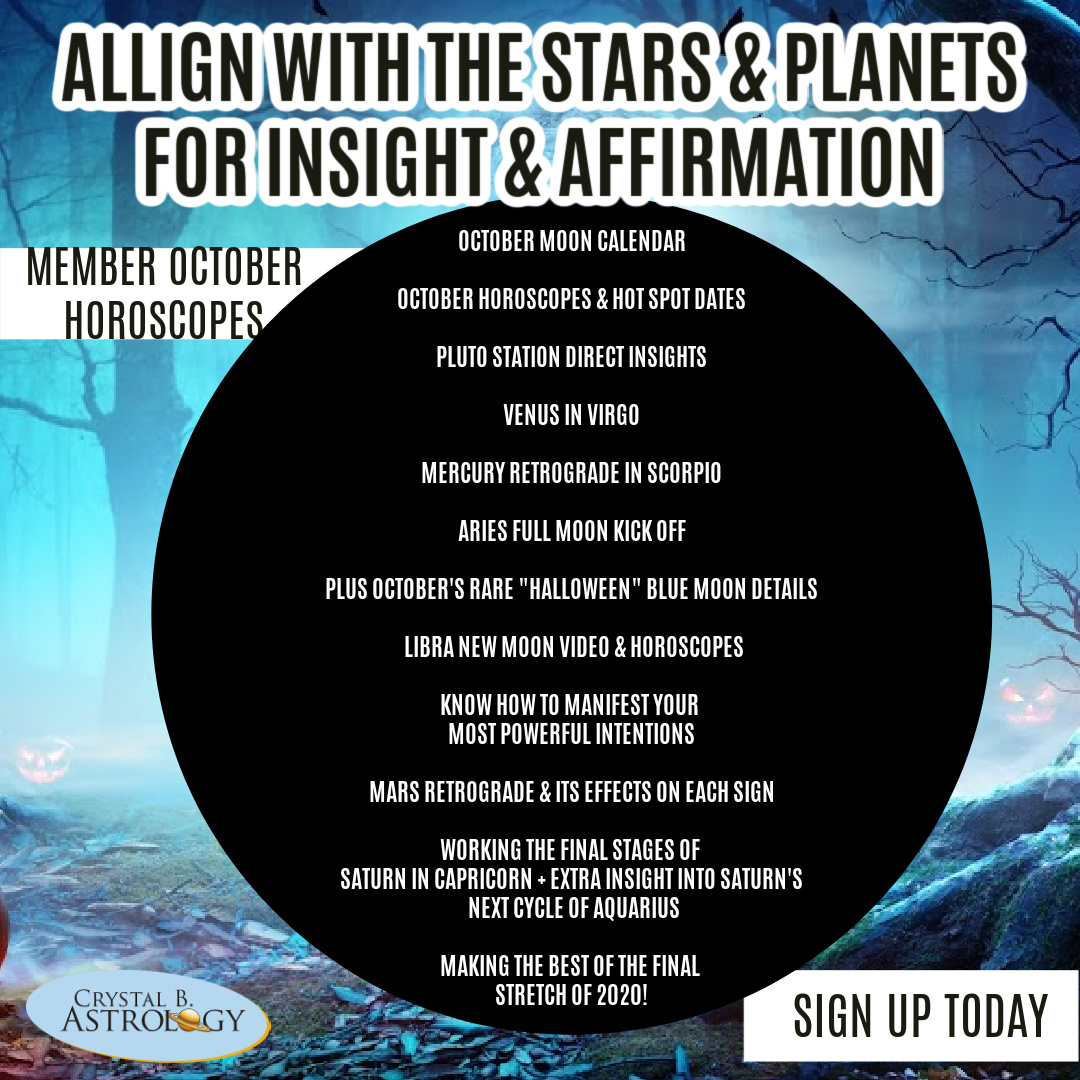 Give me the Details