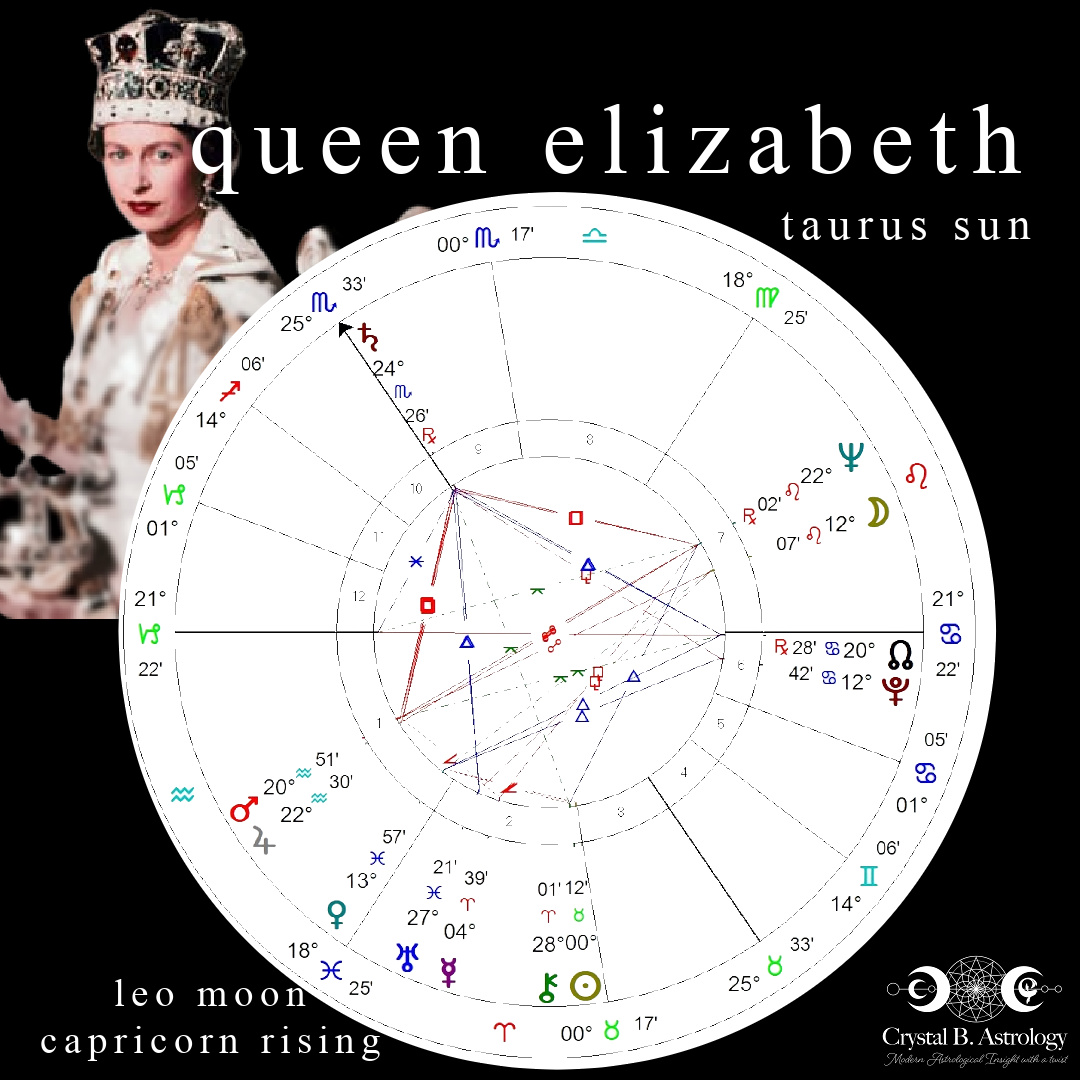 Queen Elizabeth’s Astrology Reveals So Much

After 7 decades of reign, Queen Elizabeth has left this earth … her life and celestial story are now being broadcast around the world. She is a Taurus Sun, Capricorn Rising and Leo Moon. Taurus and Leo are fixed signs …. stubborn and strong. They are also the ones getting the most amount of pressure and challenge (particularly from Saturn).  Interestingly enough, Saturn is the most important planet in the Queen’s chart because he was her ruler (Capricorn rising is ruled by Saturn).

Saturn, as her ruler, made her responsible, wise, strict and born OLD. Capricorn rising individuals usually need to grow up quickly … which she certainly had to do. Saturn has a lot to do with 7’s … the number of decades she reigned for. I say this because Saturn makes bold moves in 7 year stretches … our 7th, 14th, 21st, 28th, etc years are all major times of Saturn transits given his cycle.

✨ At the time her passing was made public* you can see the Moon just passed over Saturn heading towards her progressed Jupiter. Jupiter is welcome in death and passing as he helps to set a soul free. *Some people believe that the Queen died much earlier than what was released in the public.

✨ Her passing coincides with a Pisces Full Moon. Pisces is the last sign of the zodiac. I found it quite symbolic of such a major closing chapter of the monarchy taking place with her death. Where it goes from here will likely be quite different, as it’s already dwindled in power over the last several decades. I think most of us can see that she is the last Queen of her kind.

✨While there is a lot going on (no doubt her health had been failing for some time) Mars in her 4th house (endings and “coming home”) was likely a trigger to help push her soul over to the other side. But her chart will live on even now after her death. What’s interesting is how Mars will exit this house in mid-September but come back during his retrograde (end of December). Conflict (Mars likes to fight) within her family will likely surface. We may not know it, however, with the 4th house not being seen by the public. It may not resolve till January of 2023, when Mars goes direct. Learn more about the very important Mars in Gemini Cycle here which is influencing all of us in some way.

✨ Mercury, the winged planet, was getting ready to station retrograde, in her 8th house (the area in astrology that equates to death and inheritance) upon the news of her death. The monarchy has changed so much during Queen Elizabeth’s reign. There will likely be much back and forth about where the legacy (8th house) goes from here. 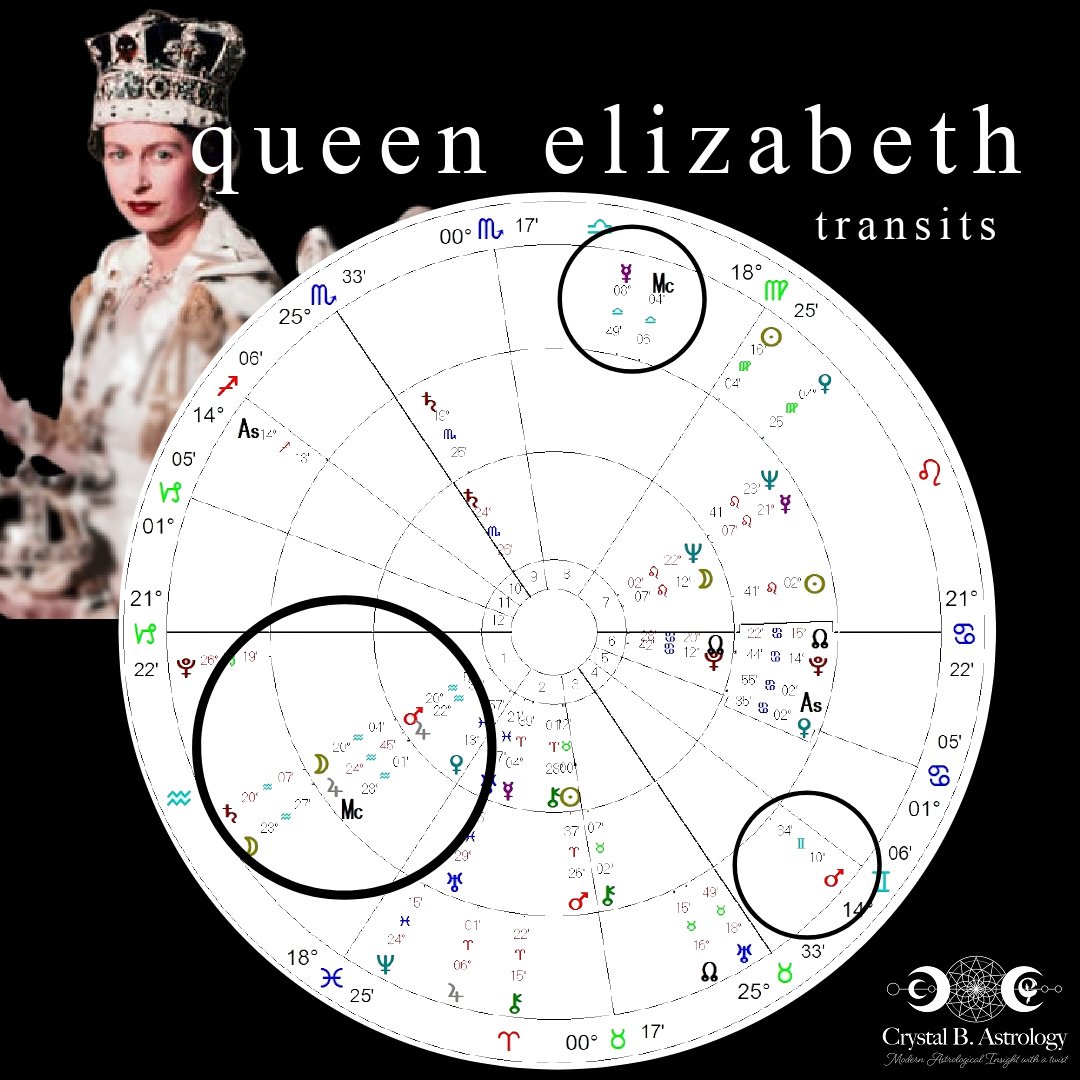 Get more astrology behind the scenes including learning visuals, knowledge about what’s on the horizon  + sooooo much more in Member Horoscopes.

Learn More About Planetary Influences Happening for You

Join Me on the Other Side 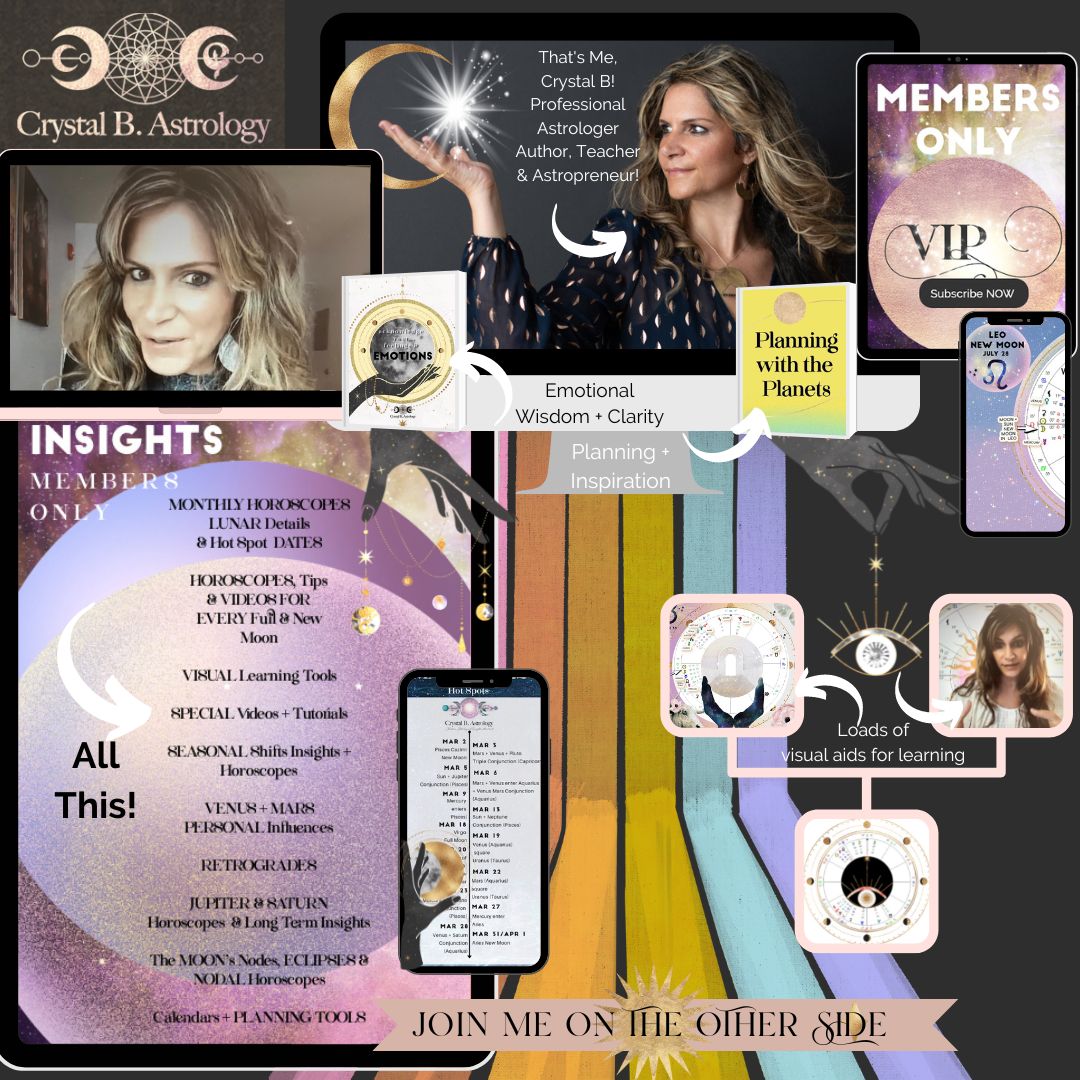