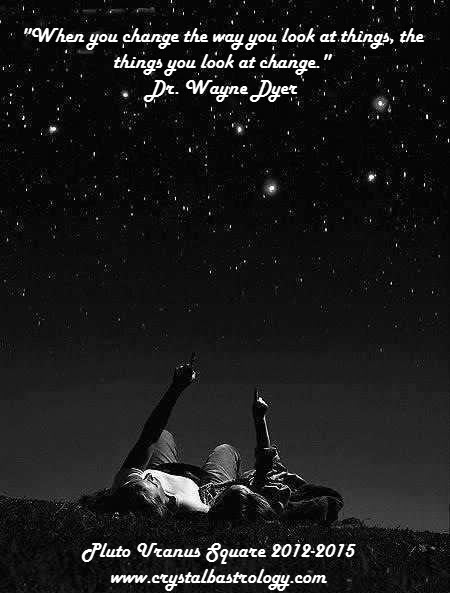 The Pluto Uranus Square is a major planetary combination that has been messing with many of us since early 2012.  Both Pluto and Uranus have created big challenges on a personal as well as a global and economic level.  They have delivered many issues, crises, feelings and pushes to change SOMETHING …… but the biggest push of all involves the process of learning to let go.

Pluto and Uranus’ battle in the zodiac have forced us into a karmic time where the wheels of fortune are spinning at rapid pace.  Many of us have been thrown into situations – entirely beyond our control which have forced us into trying to figure out how we can let go of the old – in order to embrace the new.  The process has been anything but easy and adjusting to these new changes have been more than difficult.

If your life has gone through radical change in the last few years – or perhaps you’ve begun to feel it recently – you can bet your bottom dollar that you’re caught up in this planetary challenge in some way shape or form.  Both Pluto and Uranus are powerhouse planets in their own way – and alone can cause intense havoc on a person’s life.  Coupled together – these guys can make life super intense as they demand radical change – whether we like it or not.

Have you been caught up in change over the past few years and kicked and screamed your way all the way through?

When I say change – I mean radical change– something really foreign to you which makes you feel terribly shaky and wobbly.  It’s like you can’t get a foot placed firmly on the ground and when you finally do something comes along and makes you lose your balance again.

You can blame Uranus for this.

Now when I say kicking and screaming – I mean you adamantly don’t want to do whatever it is you’ve been thrown into.  You would rather suffer torture, give your right hand, have all of your eye lashes plucked out – or even walk through the streets naked than do what has been forced upon you!  This is the point where you are on your knees and all of your power has been taken away as you thrust into this new territory.

You can blame Pluto for this.

Now put the two feelings together and you’ve got the Uranus –Pluto problem lighting up the sky.  Not pretty I know –  and I’ve seen the forces at play in people’s lives and I know it is anything but easy.  If you feel like this might be you in any way – I’m sure you have had to come to terms with letting it go and letting it be.  Fighting these forces is next to impossible and they will demand you change whether you like it or not.

The more you fight – the harder it will be.

The more you move towards acceptance and letting the “old” go – the more able you will be to take back your power and rise above the madness.  It’ll only be in this way that you’ll be able to accept that maybe life is putting you on a different path for a good reason.  And since we’re nearing the end of this cycle, many of you may be able to see that already.

However, there’s a little more to come in our story of change.  Here are the exact dates that the energy of Pluto and Uranus are in full force:

Keep in mind, however, that the planetary influences of Pluto and Uranus have been felt since their first touch off.  It will continue through the last touch and even beyond that.  Their slow movements together have created a major transition and cycle of change ….. and the grand finale is right around the corner. We’re gearing up towards the end of this radical process as we embark upon 2015.   The 7th and final exact square, taking place in March, will be the ultimate push for radical change and bring along with it a radically new beginning.

We’re in it now and we can’t get out of it no matter how hard we try. The only thing left to do is deal with the cards we’ve been handed and let go of the things that are being taken away from us. Some of us may have already decided to take a leap of faith  because of all this … or maybe yours is coming.

Things will look different when this planetary energy is done with us. Thankfully we’re almost through the battlezone – but we’ve got a little more to go. It’s like we’re the “little engine that could” chugging our way through the chaos and throwing things out the window as we forge ahead. We aren’t just throwing away “things” either – beliefs, ideals and visions of what we wanted life to look like are also vulnerable in having to be let go.

Despite the difficulty of all of it, know that you’re not alone. There are many people out there going through the exact same process as you are.  We’re all in this together and trying to see our way through.  The beauty in the process is that we’re creating something new for the benefit for the benefit of our happiness and future.  When they are finally complete, our new pictures will be more colorful and vibrant than anything we’ve ever created before.